5 Tips for Running with Kids from our AMPT Ambassadors! 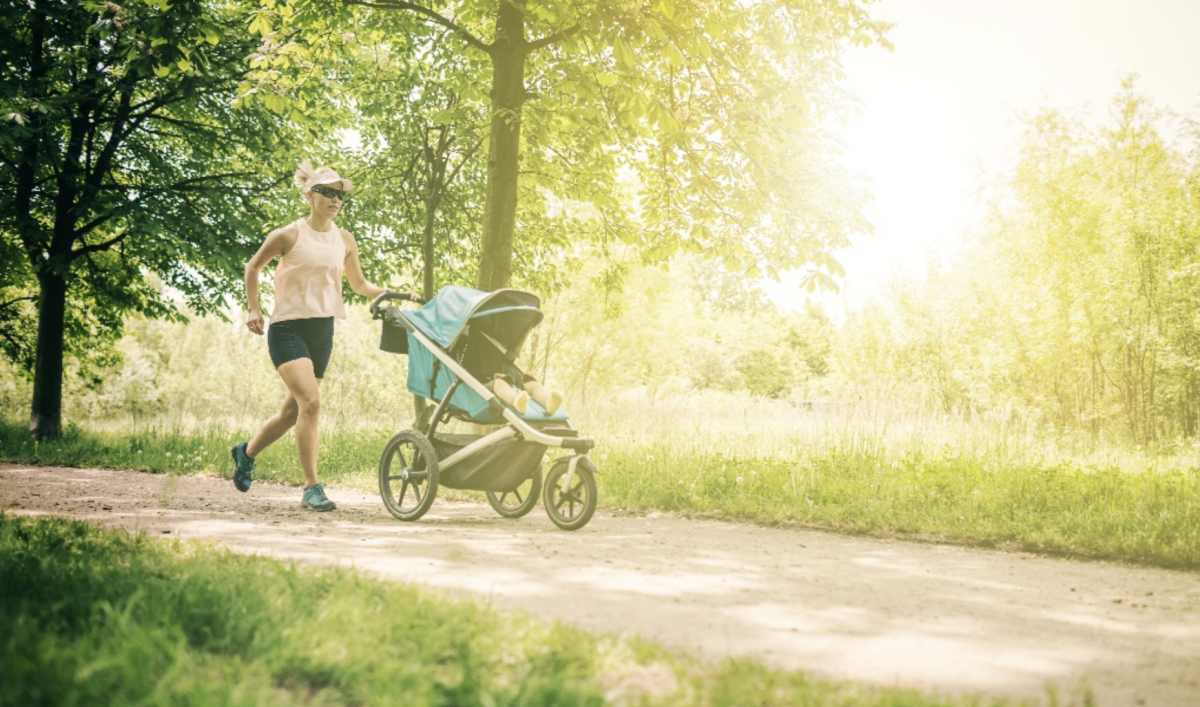 5 Tips for Running with Kids from our AMPT Ambassadors!

We can all agree that parents wear many hats not only as a parent, but also as a human being, friend, sibling, husband or wife, professional, and the list goes on. In some cases, one of these “hats” can also be described by the term “runner”. For many parents, it can be difficult to find alone time let alone time to dedicate toward running, but with a little bit of time management and multi-tasking, many do manage to fit it into their busy daily routines! We talked to 5 of our AMPT Running Ambassadors who are also parents of younger children and asked them for their best advice for “Running with Kids”. Here is what they had to say:

1) Give yourself grace. This was a common theme when speaking to all 5 of our Ambassadors on the subject. One of our Ambassadors, Quincy Johnson is not only an AMPT Ambassador, but he is also a Super-Dad to two young children, ages 6 and 4.5 months old. Quincy has been a runner all his life. His running experience started in football, which turned into treadmill distance running after high school for exercise. Despite being an athlete, his passion for running came following an injury when his doctor told him he probably would not be able to run long distances again. From that moment on, Quincy made it his personal mission to start running again, and in 2012 post-injury he started running 5K’s and has progressed to where he is today.

His advice for runners and parents is “As runners we do these training plans where we feel we have to hit certain miles on a certain day, but as a parent you need to be forgiving with yourself. Today I was supposed to run 3.5 miles, but my son woke up early and I was only at 2 miles. Instead of being hard on myself, I just went with it, it is what it is. You will eventually get there. Be easy on yourself – it is easy to be your own worst critic and analyze the amount of time you’re out on the road, but especially now with everything going on and being a parent, you need to be easy on yourself.”

This sentiment was echoed by Lindsay Malek, AMPT Ambassador and Mom of 2 children ages 7.5 and 3.5 years old! Lindsay has been running for about one year, and as a new runner and as a parent, her advice is “Have grace for yourself. Start slow and gradually build up. As a parent, you must do self-care, but just like with everything else in your life it looks a little different. Try to make a schedule and stick to it if possible, but if you don’t make it that’s okay.”

2) Self-Care is important for parents and running can be part of that self-care routine. Lindsay Malek mentioned this in her advice above, and it was echoed by AMPT Ambassador and parent to 3 children, Crystal Hooper. Her children are ages 13, 11, and 4. Crystal had previously been a runner in high school and was inspired to start running again after having her second child. She has been running for eleven years ever since! Running has been a big part of her children’s upbringing, and Crystal gave this advice for other running Mom’s: “I think it is normal for every Mom to feel guilty about taking time for themselves. I have gone through times where I stopped running because of that. The reality is you cannot feel guilty about putting yourself first. You cannot be there for your kids unless you take care of yourself. I know a lot of people say that, but I have gone through it. If I am not happy with myself, it shows in everything I do for them. I spend hours a week on myself to be better for them.”

Crystal stated that her kids respect her run days and have said things to re-enforce this and let her know she is doing the right thing. Crystal explained, “They know my run days, so they’ll say stuff like ‘it’s a run day, have you run yet?’ or the other day my 4 year old asked ‘Mom, did you get all these medals from all of your races?’ and when I answered ‘Yes I did’ he said ‘Man, I’m proud of you!’”

3) Running allows you to set a positive example for your children. Crystal Hooper also mentioned that her kids see her set a goal and follow through with that goal every day! She explained that even if they do not say much about it, she knows they see it because they see her training, sticking to her plan, and racing. They see the medals on her wall, and she said that it is such a big part of their family’s lifestyle that she does not think her kids even realize that other Moms are not runners!

This was also echoed by Leslie Parker, Super-Mom of 4 kids ages, 14, 11, and twins age 7. Leslie ran a little before college, but in 2010 decided she wanted to prove her strength to herself and did a couple of races before getting “bit by the running bug”. Leslie went from couch to marathon in less than a year – she started running in January and completed a marathon in December! Leslie’s advice? “It’s important for your kids to see you setting goals and exercising. My older 2 have done a couple of 5K’s each and my younger twins have done a couple of fun runs. We did those together as a family. They are getting into the spirit of running, but they also think I am Super-Mom. Not just because I run, but because they see me as someone who sets goals and achieves them and they respect that. There was a day a few weeks ago where I said, to them ‘I can’t do everything, I’m not Super-Mom’ and they all argued with me and told me that I was!” Leslie said her running has inspired her kids to become more consistent in their own workouts, as well. Her son is a baseball player and has kept up with his strength training at home, despite not being able to go to a gym right now.

4) Make it a family affair! Physical activity is so important for kids, and parents who lead by example like mentioned above, and make running part of their family routine help reiterate the importance and value of exercise to their kids! The American Heart Association recommends children ages 6-17 need about 60 minutes of physical exercise per day. Read more about their recommendations here.

Every Ambassador mentioned that their kids have run with them in some way shape or form. For example, Stacy Palmertree, Mom of two girls ages 5 and 8, has been running for about 5 years (just after having her second child)! Stacy said that lately her girls have been excited to go out with her while she runs. Her older daughter roller skates alongside her, while her younger daughter rides her bike. Stacy said she stays alert and yells out when to stop, but lately has been putting on music not only to motivate them, but to help them stay close to her because they have to be near her in order to hear it! Stacy also said, “It’s not about the run, it’s about spending time with my kids and just completing the miles. If you are going with older kids, make sure they want to do it. I used to ask ‘Hey, I’m going out for a run, do you want to come with me?’ and that didn’t work but I started letting them decide on their own time and now they just ask. Run with your kids when they’re ready to go with you.”

If your kids are younger, many Ambassadors recommended pushing them in a running stroller. One suggestion came from Lindsay Malek, who recommended bringing snacks, drinks, and toys to keep them occupied. Lindsay prefers to push a bike trailer rather than a double stroller because there is more leg room for her kids, and they can move around more which keeps them occupied longer, allowing her to put in more miles. She says, “it is a great way to train because when you are not pushing it, you feel like you are flying!”

Crystal Hooper ran with her kids in a double stroller as they got older, because she didn’t want having kids to be an excuse to stop running. Her advice is to invest in a nice stroller and that the wheels are important. The first stroller she tried had a wobbly wheel, and it was not only uncomfortable for her to push, but it was also uncomfortable for her kids who felt every bump. Leslie Parker mentioned that having a stroller where her twins could sit one in front of the other versus side by side would have been less bulky and would’ve prevented her twins from bothering one another during the run.

5) Find a running community and make the time to get it done! Stacy Palmertree said it best, “Make time for it, even if it’s zero dark thirty”. Stacy wakes up at 4:30 AM to get her runs in and has found a group of friends who also do the same. She said it makes them a better person in the morning because after the run they can get their kids ready quicker. Stacy values her “Mommy time” because she can run with her friends and talk about Mom stuff!

Other ideas for finding time to run came from Lindsay Malek who said she runs over her lunch break or Leslie Parker who said she would plan her long runs twice a week when her kids were at Mother’s Day Out! It’s all about getting creative and being flexible – you may not be able to run at the same time every day and that’s okay, but by planning ahead you can find time to get it done.

Thank you to Quincy Johnson, Lindsay Malek, Stacy Palmertree, Crystal Hooper, and Leslie Parker for their expertise and contributions to this article!

Written by Ashley Morrison
Ashley has over 17 years of running and racing experience and is both NASM CPT and RRCA Certified. For more running tips and tricks, find Ashley at Run With Ashley on Instagram or on her website and blog.

Sorry, the comment form is closed at this time.